When Aedes aegypti mosquitoes were detected for the first time in the Coachella Valley in May 2016, the Coachella Valley Mosquito and Vector Control District developed a response based on lessons learned by other vector control districts already fighting the invasive species. One refrain heard time and again was “you can’t get rid of this mosquito without the help of the community.” With a backyard breeder like Ae. aegypti, education efforts need to focus on changing people’s behavior as it pertains to yard maintenance. Any progress reducing the invasive species through surveillance and control efforts are temporary if mosquito breeding sources are not eliminated from people’s yards.

The District developed two targeted, hands-on community events to get residents involved and active in eliminating Ae. aegypti. The first, the Fight the Bite Block Party, focused on educating residents how to recognize mosquito breeding habitats in their own yards. The second, the Community Clean Up, provided a convenient way for people to remove items from their property that could be breeding sources. The specific goals for the events were to:

We rolled out the first “Fight the Bite Block Party” in March 2017 at a park located in an Ae. aegypti detection zone in the city of Indio. The park was transformed into a replica of a backyard with a birdbath, lawn chairs, buckets, a wheelbarrow, plants, a kiddie pool, and even pink flamingoes – mainly items that could hold standing water where mosquitoes lay their eggs. We distributed block party invitations to 2,000 homes in the invasive Aedes detection area a month before the event and 200 residents were waiting in line to participate a half an hour prior to the event start time. Residents were asked to search all backyard items for plastic immature and adult mosquitoes and then report their findings to mosquito and vector control staff at the park. They then took part in a mosquito toss game where participants won points for throwing stuffed animal mosquitoes into one of six mosquito traps. All activities were scored and the top scorers were listed on a leader board manned by volunteer students earning community service hour credits. Participants then handed in their score sheets to District staff at an information table where they went over their answers and gave them additional information, a fly swatter, repellent, a prize, and a coupon to collect their free Italian ice. All residents who attended pledged their commitment to ridding their own backyards of breeding sources.

A local newspaper, the Desert Sun, attended the event and ran a story in the print version of the newspaper as well as posting a video about the “Fight the Bite Block Party” online.

The District kicked off its first “Community Clean Up” in May 2017 in the City of Coachella where Ae. aegypti had been detected exactly one year earlier. One of the main challenges technicians were citing to eliminating breeding sources in that area was the amount of debris and discarded materials they were finding in many residents’ backyards. The District partnered with the city, the Urban Conservation Corps of the Inland Empire, and a local waste management company to carry out the cleanup. Invitations were mailed to more than 800 homes in the area about a month prior to the cleanup event.

The event was held in a local park and 53 households participated – 35 brought materials to the park, while 18 scheduled a home pickup. During the cleanup, the District collected appliances, birdbaths, bins, containers, flower pots, recyclables, and toys, filling up two 40-yard open-top waste dumpsters. Discarded tires filled two more dumpsters and a last dumpster was half-filled with trashed electronic equipment. All the items were sprayed with a solution to kill immature mosquitoes and prevent introducing them to a new destination.

District, city, and community volunteer staff received positive feedback from members of the public who took part in the events. Many expressed gratitude that the District came directly to their neighborhoods to help them and host fun and useful activities to get rid of the mosquitoes. Surveys carried out before and after the events also showed that people increased their knowledge and awareness of the invasive mosquitoes.  People also appreciated that the block party was family friendly and interactive. In addition to the positive public reaction, the events forged closer relationships with city officials, community groups, and local schools that partnered with the District, who supported the events through waived park fees, funds, staff time, volunteers, and assistance spreading mosquito awareness through city departments, websites, and school campuses. 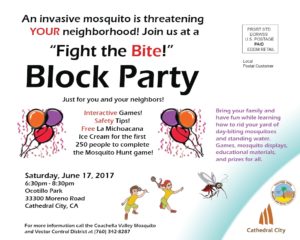 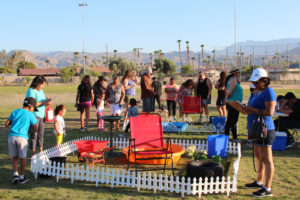 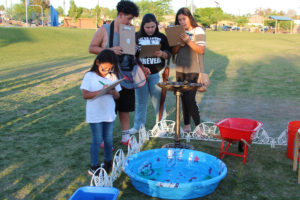 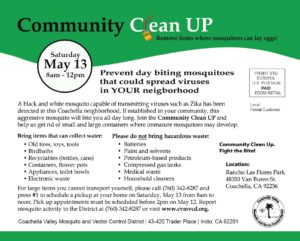 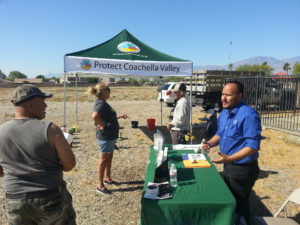 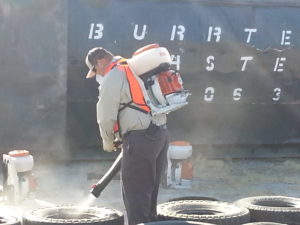 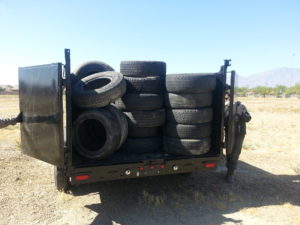