Following several years of extended drought, San Joaquin County (SJC) experienced extraordinary rainfall in early 2017. Remnant water in rural and urban areas throughout the County, resulted in record numbers of Culex tarsalis, the primary carrier of West Nile virus (WNV). In addition, the areas which were impacted most by the flood waters were located in areas with significant historic WNV activity. Through the efforts of the entire staff of the San Joaquin County Mosquito and Vector Control District (District), the early abundance of mosquitoes were effectively handled by aggressively decreasing the population before the warmer months began. In turn, we achieved our goal of protecting human health. The following is a brief synopsis of the event.

Early in 2017, California began to see relief from one of the longest drought periods in recent history. For a local comparison, in 2016 from January through May, SJC received 6.4 – 15.8 inches of rainfall (average of low to high collection sites) compared to 10.6 – 28.1 inches received during the same time period in 2017. The result: rivers in SJC were at, or over, maximum water capacity which resulted in small levee breaks, seepage, and flooded lowlands. Sierra reservoirs went from drought historic lows to full capacity. Water was released daily in preparation for additional storms.

Homes, resort areas, homeless camps, industrial and agricultural properties all flooded. The results were early high mosquito counts, consisting mainly of Cx. tarsalis and the potential for a high level of disease transmission.

A review of the District’s surveillance records by the California Department of Public Health showed “mosquito abundance in some of these areas was more than 2000-3000% higher than (the District’s) five-year averages of these locations. In particular, some of these areas were along the San Joaquin, Stanislaus, and Mokelumne Rivers and in the San Joaquin Delta.” With the significance of this event, quick action was necessary.

Early on, aggressive control actions began to take place. Technicians were documenting and reporting vast flooded areas. In response, additional Encephalitis Vector Survey traps were placed in areas of greatest concern. Mosquito control efforts regarding specific treatment areas were communicated to the public. A news release titled “Mosquitoes-Storms-Flooding,” and a flyer discussing mosquito prevention after the rainstorms, were sent via social media. The released information was well covered by local media. In addition, Q&A talking points were developed for District employees to use when encountering the public. The San Joaquin County Office of Emergency Services offered the District assistance with on-going communication on emergency conditions. As weather warmed, Sierra snowmelt filled the reservoirs and water was released to already full rivers and tributaries. As a result, Cx. tarsalis numbers began to spike, prompting ground and aerial control applications.

In early March, Governor Brown declared a State of Emergency in San Joaquin County in response to the February storms. Working with the California Governor’s Office of Emergency Services (CalOES), a “Project” application was completed. After President Trump approved a Major Disaster Declaration, a subsequent request for public assistance was developed. The Federal Emergency Management Agency (FEMA) began working with the District in developing a “scope of work” that required numerous supportive documentation. While working with FEMA, it became apparent that FEMA often handles “single event disasters,” but the winter storms continued to have affects through June, due to the amount of snowmelt released from the reservoirs which continued to sustain high water levels in the rivers.

On April 17, 2017 a second news release was sent out titled “Wet Weather Is Resulting In Many Mosquitoes and Other Bugs.” The news release was well received, being reported on television, newspapers and public radio. An ad was placed in the San Joaquin Farm Bureau newspaper, as well as in Her Life magazine. Contracted radio and electronic billboards began to run “Dump and Drain” ads targeted at homeowners to help keep mosquito numbers down.

In every disaster event, there are unforeseen situations that need to be addressed. As floodwaters continued to spread to lowland areas, new mosquito development areas emerged. This created a challenge in accessing, documenting and subsequently treating these news locations. Drastic fluctuations in river flows created additional problems regarding treatment. Applying chemicals with varied residual activity became a guessing game. Receding flood areas were treated with residual mosquito control products, only to be prematurely washed away when water was released from reservoirs preparing for additional storms.

Ultimately our goal of protecting human health from mosquito-borne disease was accomplished when compared to past yearly comparisons. During the drought year of 2016, 13 WNV positive human cases were reported in SJC. Currently, as of the date of this publication in mid- November of 2017, 14 human cases were reported in SJC. The District discovered new potential mosquito breeding sites to monitor, during future flood events. District staff is now more experienced in handling such situations. Ultimately, we were able to minimize the early Cx. tarsalis populations, and protect human health during the 2017 flood event.

The final FEMA project worksheet, with supporting documentation was submitted to Washington D.C. for funding in September 2017. Currently, the District is waiting for reimbursement. 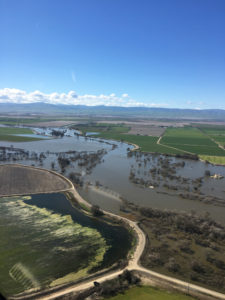 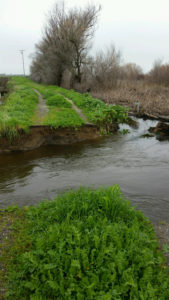 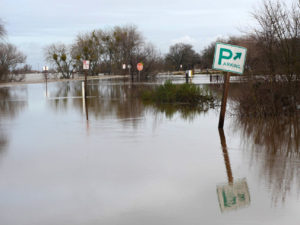