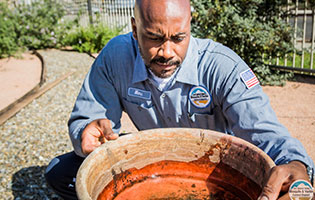 The state’s Department of Public Health recently announced that 2014 was a record year for potentially dangerous mosquito-borne West Nile virus cases, and some mosquito-control experts are concerned about the effect that warm weather and drought will have on mosquitos in 2015.

Given that the parasitic insects like to lay their eggs in water, it may be tempting to assume that California’s severe, 4-year-old drought would make the mosquito problem better, not worse. But there are many aspects to the drought that are seen exacerbating the problem.

California’s largest city, Los Angeles, has a vast network of storm drains that carry rainwater out to the ocean via the Los Angeles River. Over time, earthquakes have damaged some of these waterways, creating small interruptions where stagnant water collects.

The mosquito that lives there, Culex quinquefasciatus, remains active all year round, laying eggs in the pools. Wetter years produce regular storms that wash out the waterways. The last few years, which have been very dry, have not provided that safeguard.

Then there’s the fact that people throughout California have taken steps to conserve or catch water. Other homeowners have stopped filling or maintaining their pools. Both cases can result in small pools of stagnant water, which in turn become an excellent home for mosquitoes.

Susanne Kluh of the Los Angeles County Vector Control District, which combats mosquitoes in order to prevent disease, said her group is trying to work with cities to strike a balance between water conservation efforts and mosquito control.

Predicting epidemics is impossible to do precisely—factors include the health of mosquito and bird populations, climate and water availability, and others—but people who work in the state’s disease control groups are already seeing insects in the air.

Kluh said she and her colleagues are already observing population numbers slightly higher than their five-year average, even though the group had been chemically treating nests all winter.

“Right now, we are closer to what our numbers would be like during the summer,” Kluh said.

Vector control agencies like Kluh’s test samples of mosquito populations for viruses. They’ve already seen one sample test positive for West Nile this year. That’s unusual for this early in the year, and it’s not a guarantee of an outbreak in the same area, Kluh told CNBC.

Aside from the dry conditions, hotter summers and milder winters are also making the problem worse lately.

“We have a lot more infected mosquitoes in the area during some of these years that have very mild winters,” said Joel Buettner, president of the Mosquito & Vector Control Association of California, an association of public agencies given the task of reducing mosquito populations and testing for viruses in animal and insect populations.

Data from other states show a similar correlation between warm winters and West Nile epidemics, including a recent study of epidemics in Dallas.

California had a mild winter, so vector control technicians had to start tackling active mosquito populations early in the season, Buettner said.

Hotter summers also make a difference. The warmer weather speeds up the lifecycles of the insects. They feed more, they metabolize the blood they feed on faster, and the viruses they carry replicate faster in their bodies. All of those factors can spread the disease more quickly.

A hot summer also can extend the mosquito season from two or three months to five months, which heightens chances of a human case. Two outbreaks in Saskatchewan, Canada, both occurred toward the tail end of a long and hot season.

Other factors may limit dangers, of course.

West Nile virus is a disease that mostly affects birds, not humans. Mosquitos become carriers of the virus when they bite an infected bird. The insect can then transmit the disease to any human it bites after that. But mosquitos can pass the disease only from bird to bird or bird to human. Biting an infected human won’t by itself make a mosquito into a carrier; only contact with an infected bird will.

That’s why a sufficient number of susceptible birds is necessary to produce fast-spreading West Nile virus epidemics, according to Dr. Bill Reisen, a professor of veterinary medicine at UC Davis. But many of the affected birds have died off, and immunity has built up among those that remain.

“What we have found is that when you have epidemics that go to fruition, such as they did in Los Angeles or Orange County, usually the following year is a pretty light year, regardless of the heat and the drought or any everything else.”

The areas most likely to suffer an outbreak in the coming years are those that went mostly untouched in recent years, and since Los Angeles was hit hard in 2014, it may have an easier go of it this year.

“Areas like Bakersfield and some other Central Valley cities didn’t have a huge year, so they might be at risk,” Reisen said.

But West Nile is only one of the mosquito-borne diseases worrying some health and disease prevention groups. More recent invasive mosquito species, such as Aedes aegypti and Aedes albopictus, transmit Dengue fever, yellow fever and chikungunya. Those mosquito species are already in California cities, though they have not yet contributed to epidemics. But most people who watch disease-carrying insects are keeping eyes on outbreaks elsewhere, especially in areas where Californians travel.

While West Nile virus requires birds to spread, chikungunya and Dengue fever can be transferred by mosquitoes that are only biting the human population. Fighting those mosquitoes will require a different set of strategies, Kluh said. And, unlike West Nile-carrying Culex mosquitoes, Aedes mosquitoes can lay eggs individually, in spaces as small as a bottlecap.

“Everyone in the mosquito-control business in California is pretty worried about this as an inevitability,” Reisen said.

In most people, West Nile virus produces only mild symptoms, if any, according to the Centers for Disease Control and Prevention. There is roughly a one in five chance of developing a fever or other flulike symptoms (with fatigue and weakness that could last for months), and, usually, a less-than-1 percent chance of contracting a serious brain infection, such as meningitis or encephalitis. There are no vaccines, and no treatment other than managing symptoms at home or in a hospital, if needed.

There were 801 cases of West Nile virus in California last year, according to the California Department of Public Health. A highly unusual 561 of them were severe cases of brain infection, and 31 patients died. Health officials are unable to explain the spike in brain infections, but it’s possible that a large number of cases with milder symptoms went unreported or unrecognized by doctors.

The biggest number of cases occurred in Orange County, and the highest per-capita number was in Glenn County, where a large number of flooded rice fields provide an ideal breeding ground for the insect.